Evi was born and grew up in North London, surrounded by an urban landscape. She dreamt of the countryside and nature, fascinated and immersed in the images of natural history books.

This interest was cultivated during her teenage years and further developed when she studied and graduated with a BA (hons) degree in Scientific and Natural history at Middlesex University, London.

After graduating, Evi worked for many years as a natural history illustrator on many publications, using traditional watercolour techniques.

She went on to run a successful illustration agency alongside her husband from their studio in a nature reserve. Evi’s dream of living in the countryside was realised and she was able to immerse herself in her surroundings and further her inspire her love and work for natural history. 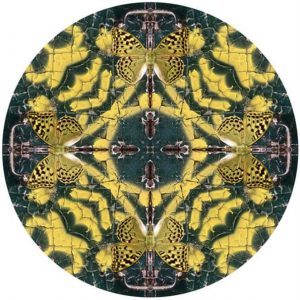 After having and raising their two children, Evi returned to the studio but she decided to explore a new contemporary art form.

Her creative approach was informed by a combination of professional experience, an almost obsessive eye for detail and a real passion for the traditions of natural history illustration. Embracing new technology to express her vision, she combined digital painting with hand finished and glazed prints, using the highest quality fine art paper in small editions or one-of-a-kind pieces.

Painting digitally, using photoshop and a digital pen, Evi applied the same level of detail and understanding as she did when she painted traditionally. Butterflies, insects and lobsters are a common theme in her work but more recent work has focused on the beauty, symmetry and patterns mainly in butterflies.

Her career as a full time professional artist gained momentum in 2012, when she was accepted and exhibited in the Royal Academy Summer Exhibition, where her whole edition of 'Jonos Lobster sold. Evi’s has exhibited her work both as a solo artist and in group shows with all over the UK and affordable art fairs. In 2016 Evi won a prize for best artist, East of England with the National Open Art competition and also was The Secret Art Prize runner up winner in 2018. Most recently, she was one of the winners of The Cult House Open Call 2019, in collaboration with Runway gallery which resulted in a successful exhibition In Blacks Club, Soho.

Her work took a new direction after moving back to London in 2017, when her son won a five year scholarship to a theatre school in London. Surrounded by a very different urban landscape to the one she left behind, Evi discovered a new found inspiration in the street art and graffiti around East London and her work evolved. Evi’s current work absorbs and reflects her surroundings, but her love of nature remains rooted and prevails.

Check out Evi's work on the walls at Century Club this spring. All her pieces are available to buy online from Runway Gallery.
COVID-19 Century At Home Apply for Membership
Opening

Century will be opening again on Monday 17th May. For bookings, please contact reception. We look forward to welcoming you all back.